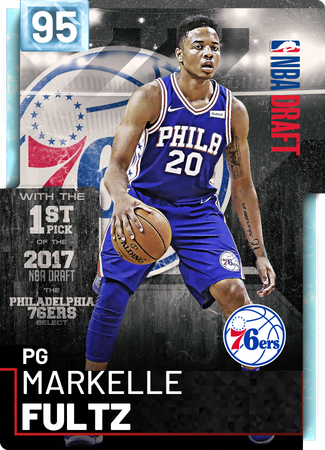 Markelle Fultz who is already being considered a bust by a lot of people has received a card in this years 2k. He was drafted to the sixers as the 1st pick because of his freak athleticism, shooting ability (lol), and passing ability but was also a creative finisher around the rim. After playing multiple games of unlimited and triple threat this card has amazed me. I was reluctant to play with him at first but now has my lineup looking likeThis

Bought for: Packed, however goes for 4K on PS4

Weaknesses: There are literally no offensive flaws, but his defense is not as good as it could be due to his:

Recommended Strategy: Use Markelle Fultz's rhythm dribble and blow past your defender, keep doing this until he sags, then start shooting 3's to keep him guessing.

Use if: You want an Inside-Outside threat that can pass amazingly

Bottom Line: Best card in the game, for the price he is. Amazing dribble moves, amazing jumpshot, amazing driving ability. This card is what the sixers were hoping for when they drafted him.

Good Review, I packed him today and didn't want to use him because of his track record. I played a few online games today and he surprised me! This review really breaks down Fultz in a nutshell :)

BTW, I am a bucks fan (have been since 2015) and so I have no emotional attachment to fultz, just in case anyone thinks I am biased.

Usually when I read this good of reviews for diamonds, I think it's BS, but i just picked Markelle up and holy crap ur right. He replaced PD penny as my backup PG, that release is too butter and the 11 HOF badges is insane for a Diamond. thanks for the sick review bro, wouldnt have picked him up otherwise but very glad I did

For a diamond card, Fultz is honestly amazing. He is like a taller PD Derrick Rose, and like you mentioned, can shoot very well. Picked him up on the auction house a few weeks back and I gotta say this is a budget BEAST.