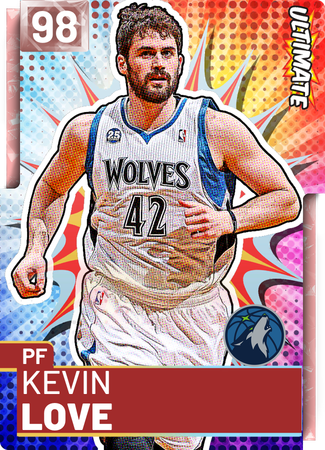 Budget Beast: Not OP, But Good

I bought this card off the auction house to try him out considering how cheap he was, I liked his stats, and he definitely met my expectations, but he wasn't incredible. I ran him at power forward and center.

-Speed: Kevin Love is far from a demigod, his 82 speed isn't very good, and the 65 speed with ball is just bad. This is definitely the worst part on this card.

-Defense: Now don't get too intrigued by this, he isn't a bad defender, he just isn't a versatile defender. He should work at power forward, but your opponent could be running a stretch four, like Kevin Durant or something, and Love will not hold his own. He's too slow to guard a stretch four, and his 79 on ball defense IQ isn't helping. Love can sort of hold his own against centers. Although he could be taken advantage of in pick and rolls, he doesn't tend to get bullied too bad. His 92 block is very good, but you'd be lucky if you got a steal. And his lateral quickness is horrible. -To sum it up, Versatility-He's just not versatile offensively or defensively.

Recommended Strategy: Post ups, fantastic post game. Pick and fades, if they guard it, then you got an easy one on one with your point guard, if not then Love's 98 open three will bury it. Live at the foul line.

Other Comments: (optional) He also does have hall of fame limitless range, which is fun. He's not cheesy or OP, just solid.

Use if: "You want a great budget stretch center, or a big power forward

Don't use if: You like spending a lot of MT, need a stretch fast 4, or a cheesy OP player.